After crossing the border to Tajikistan, we cycled 20km to a large river where we asked for a place to camp. We were invited to stay in a shelter by the river, which belonged to a large Tajik family who lived in the nearby house. One of them spoke English and brought us a second dinner of Plov (the central Asian staple). We'd already cooked and eaten one! We talked about Tajikistan, England and Holland (Paul is Dutch) then had a wash in the river and a great night sleep. 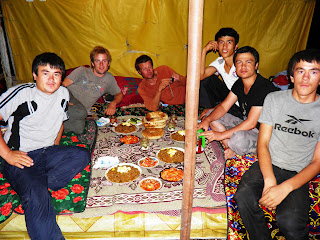 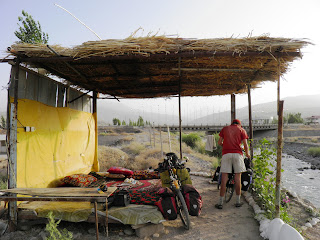 An early start and a very fast ride for the first 3 hours of the day got us into Dushanbe for 9 AM. Paul went to the Kyrgyzstan embassy and came back half an hour later with his visa - unbelievable service! We met a Swiss couple who have been on the road for 5 years. I'd already met them in Khiva, Uzbekistan. We had a late lunch with them and spent about 4 hours talking, then we were finally heading for the Pamirs. This is the most remote part of the trip and the part I am looking forward to the most. 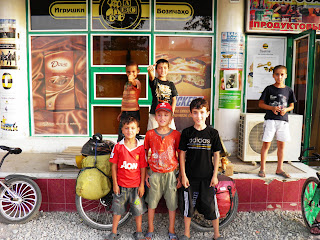 After leaving Dushanbe, we passed a power plant belching out a disgusting amount of pollution and arrived at a village. We asked for somewhere to sleep and after about 45 minutes of deliberating (I have no idea what they were talking about) the elder of the village introduced us to our host, Rhadijon. We walked with him for about a mile, followed by a trail of children, including one who had been ordered to carry a watermelon for a gift for us. It was massive and the poor boy was obviously struggling to carry it all the way to the house! We were shown to a room and served a fantastic dinner of pasta, watermelon, nuts, yogurt and sweets as well as the obvious Chai! The next morning we had a look around Rhadijon's land. They had a few cows and piles of dung to burn in winter. They had crops and it looked like they were almost completely self sufficient. Rhadijon was some official in the village, he called himself the 'President' and he had a stamp which he proudly used on my diary! 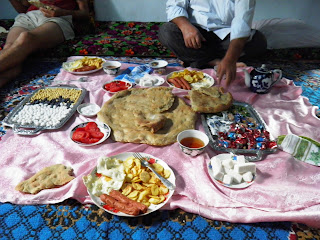 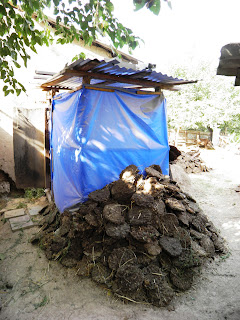 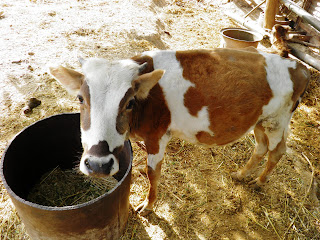 We left the village and climbed up a fantastic river valley. At every village we stopped for an ice cream (they were very cheap!) and in the early afternoon we came across an irrigation canal. There were loads of kids and teenagers there swimming so we joined them. An aquaduct with holes in the side formed a perfect shower. There was a fairly deep pool where the kids dived and flipped to show off to the weird foreigners. 3 older guys showed up in a Lada, blaring out hip hop and came out with aviators on. It was very funny, the kids were obviously in awe of them. They proceeded to do a workout in the canal then shared a watermelon with us. That night we found a fantastic campsite by a river and cooked a great dinner. A small boy galloped up to us on a horse and stared at us, he'd evidently never seen anything so strange as two very white people speaking in a strange language and sleeping in 2 weirdly shaped cloth houses! 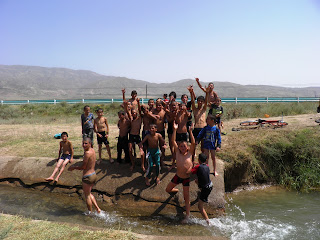 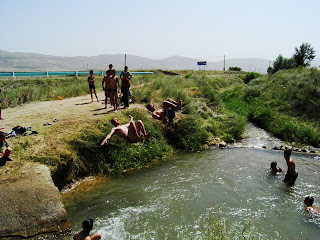 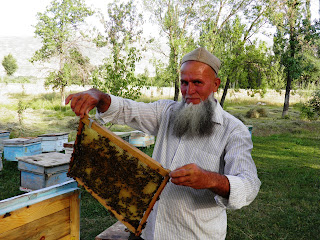 The next day, we followed a great road to the town of Obi. We stocked up on food and Paul put his phone on charge in a shop saying 'I must remember not to forget it'. We left the town and after 15km of fantastic descending Paul cried 'Aggghhhh!'. He'd forgotton his phone. He hitched back up to the town while I watched the bikes and he returned in a lorry an hour and a half later with the phone! That night provided another fantastic campsite and a ghostly moon silohette as it rose over the mountains. 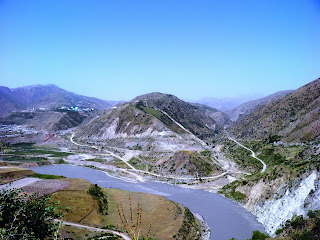 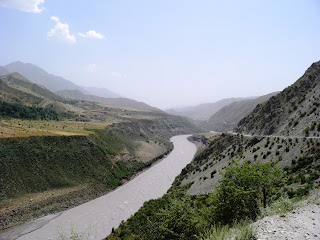 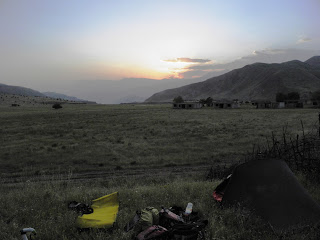 The next day was more climbing and descending on tarmac, dirt roads and rocky tracks. The river in the valley was really powerful, very impressive to see the rapids. After two police checkpoints, one of Paul's rear panniers broke and he had to tie it on with rope. We found another fantastic campsite and got a good night sleep preparing for a large pass tomorrow. 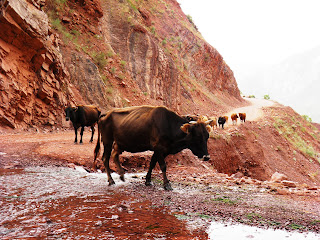 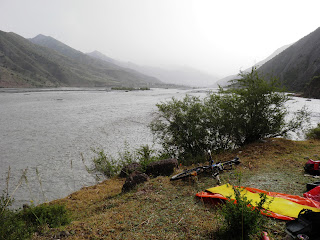 The next day was one of the best of the trip so far. We started fairly late and the laid-back start continued after four miles when we stopped for a second breakfast. We climbed an alpine valley up a track which was beautiful but unfortunately the views were spoiled bu a hazey mist.We cycled through wild flowers and the smell of herbs, past donkeys, calves and herds of goats. We met a Ukrainian journalist cycling the Pamir Highway who was pushing his bike uphill and a girl who had cycled from New Zealand on a 4 year trip doing the route in reverse. We stopped for another couple of Chai's and after passing a couple of false summits, we eventually reached the top. 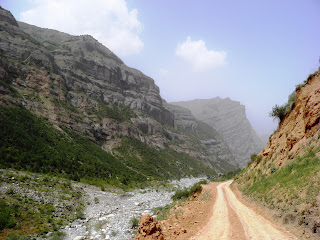 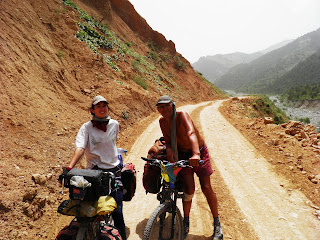 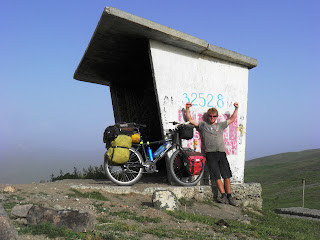 The other side was amazing! An incredible descent down a rocky road which clung to the cliff edge and followed the valley down a series of switchbacks. We dropped 2,000m altitude in 1 1/2 hours and found a nice homestay in Kalaikum to end of the best day of the trip so far. 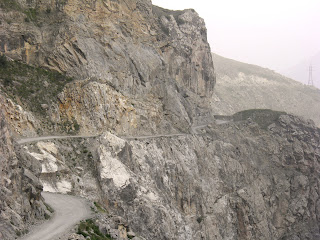 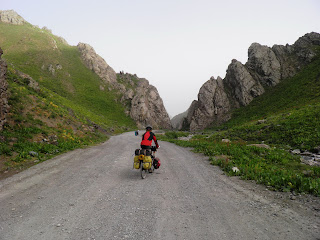 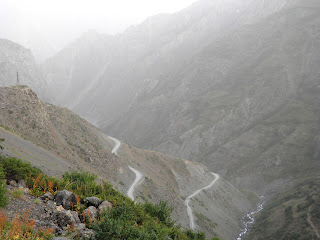 We had a long breakfast and started riding around 11. We joined the raging Ak-i- Panj River on the boder with Afghanistan and followed a good road along a stunning valley. We passed through beautiful villages growing fresh fruit, which kids sold to us. Their mothers let us barter with them and we taught them lessons in business! I got 2 flat tyres because I was using rubbish inner tubes from Denov bazaar and I put my final tube in hoping it would last until Khorog. It had a puncture which I fixed and I prayed it would last a couple of days. 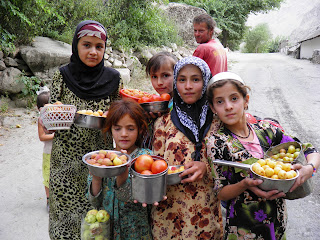 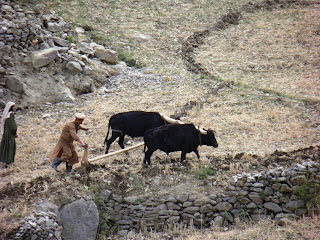 On the river I passed a nice sight. A Tajik girl was playing a game with 2 Afghan boys on the other side of the river. They were throwing stones and communicating with each other across the river despite the nearest crossing being over 30km away. That night we cooked our culinary highlight of the trip as 'Team Beer', a fantastic fish curry. 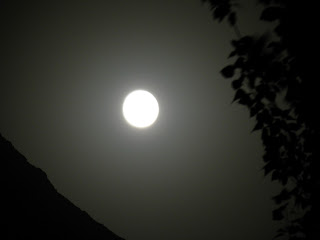 One night in the valley, we camped just across the river from Afghanistan and were invited to a concert in the village and were promised Tajik music. We turned up and weren't allowed to pay for the entrance ticket. The music was absolutely awful. Truely terrible. The guys couldn't sing except for one of them. The girl introducing the acts spoke into a microphone which was put through an echo synthesizer. The highlight of the show was two rappers who were trying to be as American as they could - not very Tajik. They were good though, until the backing track skipped and we found out they were miming! It was a great experience though and the locals loved it! 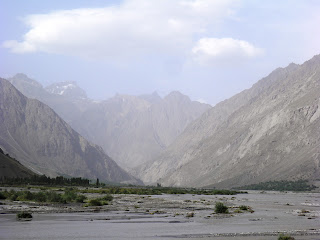 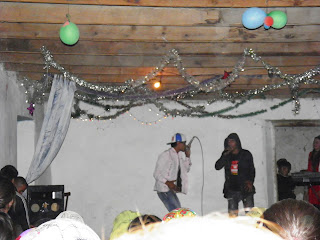 A short ride the next brought us into the town of Khorog, the capital of the Pamir region. It's an amazing place, considering the location. The Aga-Khan, a Swiss born man who is regarded by the Ismailly Pamiris as a living God donates a lot of money to the town and has prevented a certain famine for a number of years, as well as opening schools throughout the region and a University. On the way into Khorog I got stung by a bee again, this time imbetween the eyes. During the stay there I had to go to hospital because my face swelled up so much I couldn't see. I had to stay an extra day in the hostel in Khorog too because I had terrible stomach problems including vomiting and fever. I met an amazing British guy there called Alex, who was blind and travelling from Beijing back to England by public transport. Inspiring guy and puts what I'm doing to shame. 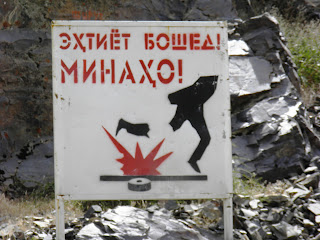 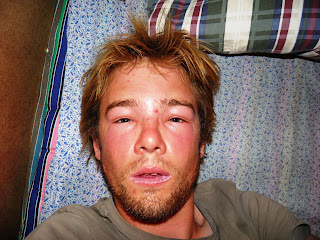 After 3 nights in Khorog, I was well enough to leave for the Wakhan valley.